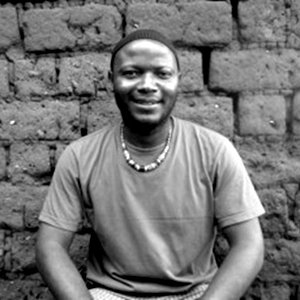 Che Walters Angu was born in 1980, a native of Mazam District in the Northwest Region of Cameroon. The artist’s studio is in the NW city of Bamenda which has since 2017 found itself at the very center of a brutal civil war..
There are not a lot of places more perfectly remote where a gifted artist seeking to emerge from obscurity faces greater obstacles.
The artist – who autographs his work, Angu Walters – got his start as a student of the noted American-born Cameroonian artist Nzante Spee. Wikipedia characterizes Spee’s paintings, which could as well be applied to Angu, thusly, “His style, from cubism to surrealism and addressed to a naïve caricature but full with provocative humor culminates in a pictorial world where all these expressions are mixed in the so-called melting age aesthetic.”
Long before the war, Angu – who favors traditional African music – was a member of the “Melting Age Band, MAB” led by the late Spee. A large share of his paintings are of musicians.
Angu’s interest in painting started when he was a boy experimenting with ink from different pen colors, mixed and applied them on torn cardboard, which was sometimes hung on the walls of his mother’s sitting room. His mother invited Spee to have a look at what the child was doing with the materials he could find in his milieu. Thereafter, the famed artist took him to his workshop and guided him on how to improve his skills. Since then, he has had a professional revolution with much inspiration drawn from his fine arts mentor.

Angu paints in diverse styles, most often abstract figurative and surreal. In addition to musical-themed paintings, his work often focuses on family life and African village life.
His works express surrealism because he believes that his dreams are inspirational to his life and works. He often titles his favorite paintings, “The Happy Family”, because to him the family is the foundation on which a successful professional and matrimonial life is built. Many paintings express his special reverence for mothers. 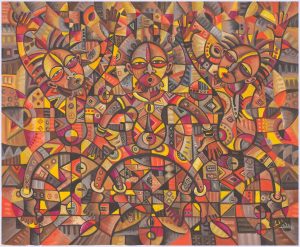 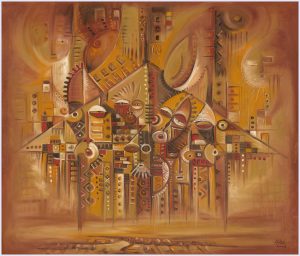 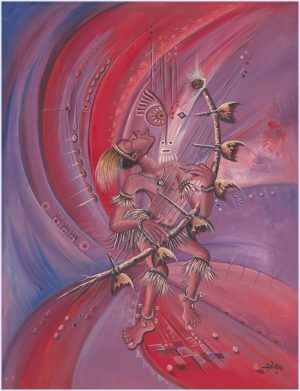 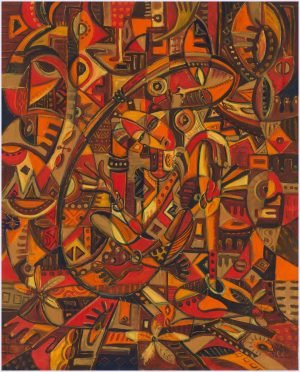 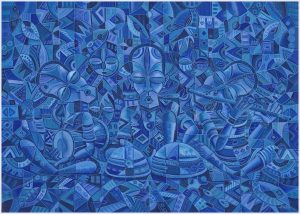 The Drummer & the Flutist II 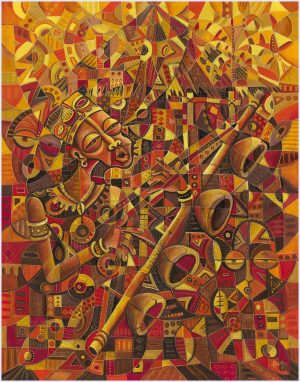 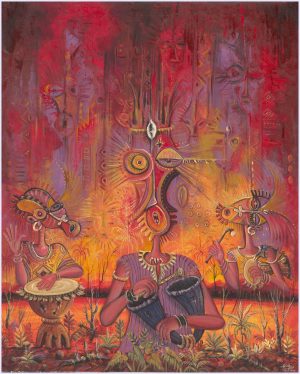 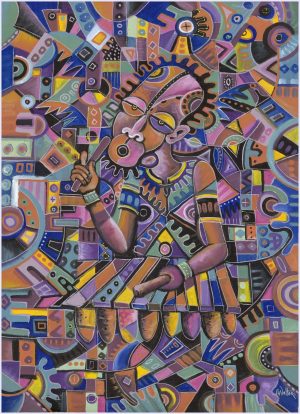